I’ve been looking for an STL slicer for laser cutter for a long time, and Kiri:Moto’s GUI is by far my favorite. There’s actually a big hole when it comes to slicing STL’s for laser cutting. People used to work with 123D Make and Slicer for Fusion 360, but both of these were retired. So there’s no alternative. LuBan seems to do some of it, but it’s super outdated.
In any case, the current slicer in Kiri:Moto seems to be good only for simple things, like slicing an entire model into evenly spaced discs.

Here’s what I think would help make it more popular for laser cutting (I believe you could easily charge for it if you add this feature):

The users should be able to make some kind of a ‘skeleton’. Slices should be in two axis, with connections at the intersections. Either two perpendicular planes, or one major axis and radial slices around it. Basically make slices in several directions and then use a boolean operation to make joints.

Here’s an example of an old project someone made with 123D-Make: 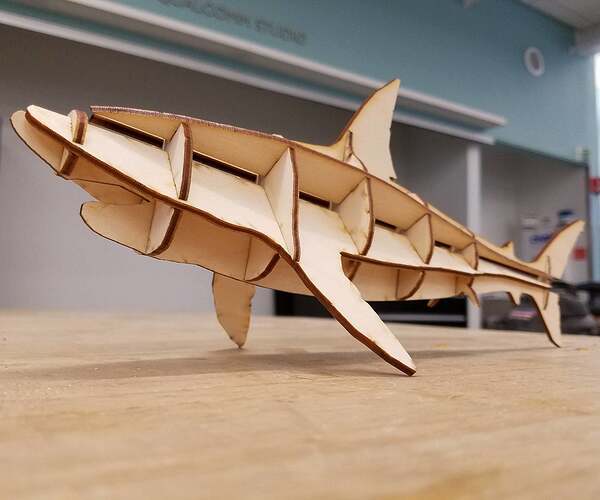 Laser Cut Shark: In this tutorial, we will be making a 3D shark model out of 2D pieces. Please download the attached file 'shark parts' (either the .ai and .pdf file work, depending on your software). First, I would like to give credit to shraska1...

Let me know what you think!

I’ve seen projects like this and made a few the hard way. It’s a fun idea, but with a complex UI treatment, I fear. I’ll certainly think on it.

I was thinking you’ve already done most of the job, but I have no experience with UI, and I was thinking about the math side. In any case, keep up your great work!