So, my for my current project, the part I’m making needs to be carved from the side, and then finished from the top. The side pass drills some holes that are used to mount the part more firmly than my clamps can when it comes time to carve the top, and also cuts some slots which will later define the bottom of the part. The top carving mainly just creates the curved (in both X and Y) top surface.

I’ve been doing this in Onshape, by creating the two different parts from the same sketches, so the two parts are kept in sync. The two parts are separate mainly because it’s how it occurred to me to do it – the part cut from the side is really just an appropriately formed “blank” for the final top carve.

And here’s the final result. (The curved piece with the bevels underneath gets cut from the rest of the base manually.) 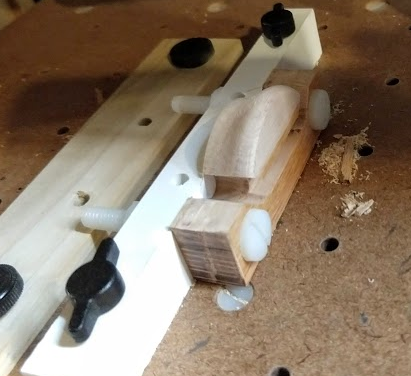 The final product (this is actually the original, that I’m attempting to copy) looks like this:

But I realized the other day that if “flip” wasn’t limited to 180 degree flipping, I might have been able to design just one part with all the features, rather than two, each of which only has some of them. I handle registration with careful homing (my mill has probe actions for homing in X, Y, and Z), so registration support isn’t necessary in this case. And the big advantage would be that KM is willing to support separate profiles for different flip phases, therefore many of my questions about KM’s config model wouldn’t have come up, and I wouldn’t be exporting/importing my two different profiles all the time.

Anyway – I have no immediate use, since I’m about to start carving my final parts with my current setup, but it’s something to consider. A flip could specify an angle (in my case -90 degrees) and I guess for completeness, more than one flip should be allowed, so you could carve top/bottom/sides in various orders. (In the end, “flip” might be the wrong name. Something like “reorient”, or “next side”, might be better.)

Just something to think about!

this is an interesting idea. it’s not a huge stretch from what’s there now. but it does violate some assumptions inherent to a 180 degree rotation. perhaps another way to maintain several op chains + orientations in a single profile…

this would be a nice feature. After a lot of struggling with a lot of different tools I was able to mill a 4 sided cnc job, front, back top and bottom, there is a logo on the bottom. 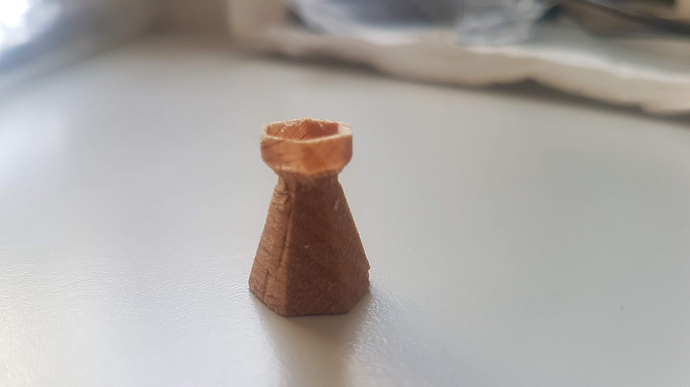 If this could be optimized would be awesome.