I was using 2.3.D2 earlier, and I see that you’ve already fixed a few things from that in D3

So I made a pocket around the part to induce the roughing that I wanted: 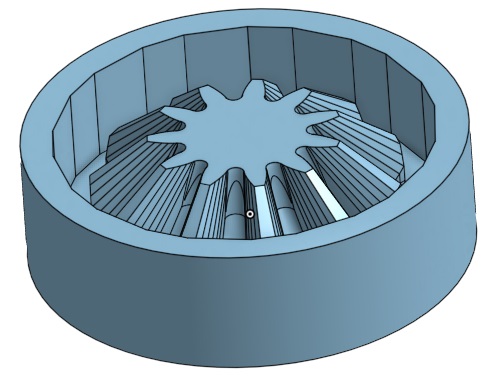 That worked in D2.

(There is no hole because I wanted to rough the hole and teeth separately and I didn’t see a way to do that. Today I’m not sure I would want to separate those operations again, assuming depth-first, so this isn’t about that.)

Today in D3 the same fails with an error:
“TypeError: Cannot read property ‘clone’ of undefined”

The hexagonal example I’ve been using also induces the TypeError.

So a decision has to be made about how to resolve this. In 2.2 roughing will clear outside the part boundaries down to the surface, which can end up cutting out a part. That’s good and bad. It was some complicated code, and I can re-add it. As of now, though, roughing stays strictly inside the part boundaries. As you see, this creates a problem for outline. In order to solve the above, outline needs to perform a cut down through the actual part outline, and not just do waterline offsets. And that sort of defeats the elegance of the outline.

A bunch more fixes are coming later tonight. The TypeError you pointed out above is one of them.

I’ll cast a vote for an option to rough all the way down – with provision for not cutting out parts prematurely. Below I’ll relate that to outlining

I’d like to have the all-the-way-down roughing option with ‘leave stock’ and ‘wide cutout’ parameters.

To not end up cutting out parts, “all the way down” could have modifiers. Like tabs or an “onion skin” remainder. Tabs/skin/rough/finish all orthogonal, I think.

Supposing such an off-the-part roughing capability:

For outlining, I’m thinking any instance of slope requires prior removal of overlying material, regardless of whether inside or outside the part area. Proposed general solution: when a waterline outline operation generates any deviation from a straight stack of identical outlines (mod skips for tabs) it also raises an advisory notice.

Possibly add an outline option to cut straight down to the bottom outline, but I don’t have a use case in mind.

To be nice, the notice could include advice for the user to ensure one of

[1] In principle KM could check if such an an op is already configured, but hair and this doesn’t depend on that.

… and a tangentially related idea

“Z thru” (happy to see that back) could evolve into a couple more offsets:

where either bottom offset could be >0 to prevent cut-thru or <0 to ensure cut-thru.
Orthogonal to tabs e.g. very thin onion skin for vacuum table + tabs for mechanical strengh.

excellent feedback. I’m going to push out D4 tonight with a ton of fixes, then start working on the CAM list again.

2.3.D5 just went live. contains many CAM fixes and other under-the-hood improvements. also, a little eye-candy, like this speed legend. you can disable it in preferences. 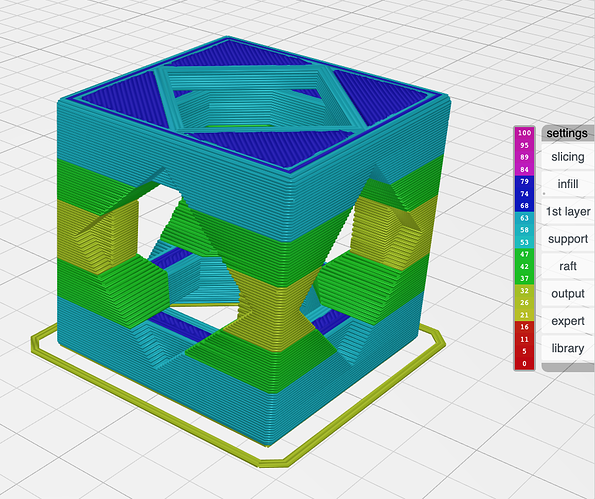 Great stuff, and very generously given! 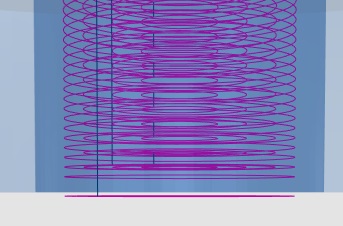 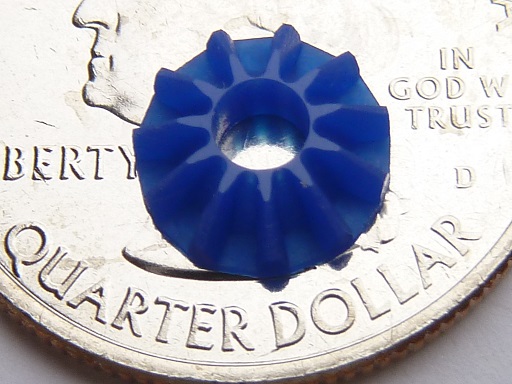 Thanks for the write-up. I think I’ve fixed or otherwise addressed everything you mention here for tonight’s D6 release.

I would like to make the 2.3 series production by the end of next week. Tonight’s D7 release should not only have full support for all features in 2.2, but many more. Until today, there were still a few things in 2.2 that hadn’t made it back into the 2.3 branch.

And then there’s some other stuff.

I get that refactoring rendering is forward-looking work.
2.3.Dx rendering has been flakey for me. The following seems pretty consistent:

After slicing (not preview), the ghost part and slices vanish, leaving only the ghost stock box. Sometimes the top slice is vaguely rendered where it coincides with the top of the stock.

Solid or wire renderings of the part will be visible.

On selecting preview, the ghost part remains invisible but the toolpath is rendered normally.

After slicing the ghost part will be visible from below the work surface, but it occludes the toolpath as if a solid rendering.

ex12-slice-below726×311 39.1 KB
On selecting the preview display, the ghost part and toolpath will render normally.

When the sliced part is not visible from between the work surface and stock top, it becomes visible when the front clipping plane moves inside the stock. The following two pics show the sliced and preview renderings from the same viewpoint with the front clipping plane intersecting the stock side. In the sliced view a) the toolpath is rendered or not along with the ghost part, and b) where rendered, the ghost part occludes the toolpath.

Also advancing the clipping plane into a void in sliced ghost part will reveal the paths inside the void - as with a solid rendering.

Adding a second part to the work surface adds another wrinkle to rendering. After slicing one of the ghost parts and toolpath are rendered – if the view point is off vertical (i.e. “home” not “top”). While orbiting an off-vertical viewpoint around the platform, two parts alternate which one is rendered. It looks like it’s always the more distant part (more obliquely viewed). At transitions - same distance from both parts - it may be possible to find views where both or neither part are rendered. As with a single part: at some angles the top slice is vaguely rendered.

In this case, unlike the single-part case, when a ghost part - and path in slice view - are not rendered they are not rendered when view from below either so they vanish entirely.
A solid or wire model will be rendered, but in sliced view the non-rendered toolpath will remain invisible. Except that when viewed from directly below, both parts are rendered.

In preview, the ghost parts alternate rendering but both toolpaths remain rendered normally.

Something I mentioned in email a while back:

The G0 includes a clearance height appropriate for the lateral move, but it moves diagonally to that height above the target point, raking the part on the way, then feeds back down to complete the move.

I think I found the cause, then left it alone since you’re refactoring all around there. It looks like the relevant code has survived in mode/cam/prepare.js

This file has been truncated. show original

The first problem is self-inflicted: when “tolerance” is set to something larger than the required Z lift, mustGoUp does not get set. Fair enough[*]. Then it should move like there’s nothing in the way. Doing the ramp up to a level that it’s already decided to not clear then feeding back down slows down for no benefit.
After mustGoUp is not set, it is tested to see if the spindle should be lifted before the lateral move: no.
Then mustGoUp or the likely condition point.z < maxz are tested to see if the lateral move should go to the higher level: yes. And so it does.
Suggestion: after lifting or not lifting before the lateral move, it should just make the move at constant Z without testing again. If point.z < maxz is a relevant condition, it shouldn’t be omitted from the pre-move lift test – ??in which case skip the comparison with tolerance??

eh, more, but I’ve got to send this for now.

It’s going to take me a while to do justice to this post. But I wanted to say that I spent a good deal of the day on rendering issues. I resolved many (most). And only just after I pushed D8 did I find the real solution. That goes out tomorrow. Disappearing objects no more.

Can I ask you to join the Discord server and share your parts with me? You can’t drop them here, but there you can, either in direct messages or in the shared channels. Email is ok, but Discord just rocks for faster collaboration and history.

I want to solve any collision issues before 2.3 goes GA. Also if there are perverse depth-first paths with your parts, I want to poke around on that, too.

Thanks for spending so much time digging in. It definitely helps me focus and prioritize fixes.

Edit: I don’t think I can get the mapping from Onshape. But I’ll look at adding an “Onshape default” selection to the UI preferences.

Edit 2: Tolerance setting is now only used in contour xy operations. Thanks for highlighting that. A new collision method was introduced that, thanks to your post, I now realize fails for tiny parts. Will fix that tomorrow. And move tolerance under contouring. Contouring is expensive because it has to rasterize the entire surface of the object at the given resolution (tolerance)

Non-depth-first (what to call that? - “breadth-first” I guess, tho seems a bit awkward) roughing works for this part alone. But when I add a second part to the workspace, the toolpath for this part crashes between inside & outside at each layer. 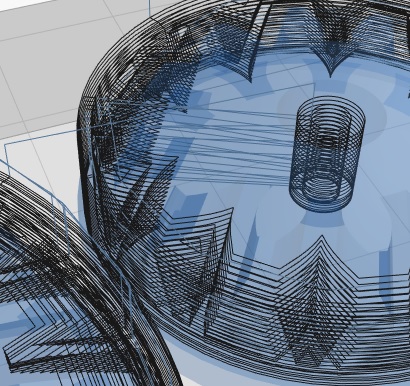 …but that session timed out before I got an export - and when I tried to repeat it, roughing the smaller part alone did not work but failed as shown above. So I exported that scenario. Will try sending by discourse or fall back to email.

So that’s that. Then the example spins off some other comments/issues:

for the kids watching at home, I have repro’d this bug. it seems to involve a situation involving more than one part. it’s a bug I fixed in the past in an older version of the code. but I rewrote that recently and did not test this scenario.

the onshape session bug is known. I’m working on that first thing after the 2.3 release this week. their development model makes this especially hard to debug.

found and fixed for D12 tomorrow.

are you seeing paths cut the same are more than once or just a lot of hopping around?

More than once.
a/each hole will get cut depth-firsty all the way down, then each slice of that same hole is cut again along with layers of surrounding features.

Hi all,
first of all, thanks for this nice tool : although I’m used to 3D printing and slicing, I’ve been somewhat puzzled when I came to milling with my usual Slic3r and PrusaSlicer, Kiri:Moto saved me.
Now, I’m using Kiri:Moto for slicing CAM parts and found a functional difference between 2.2 and 2.3 with the same configuration : 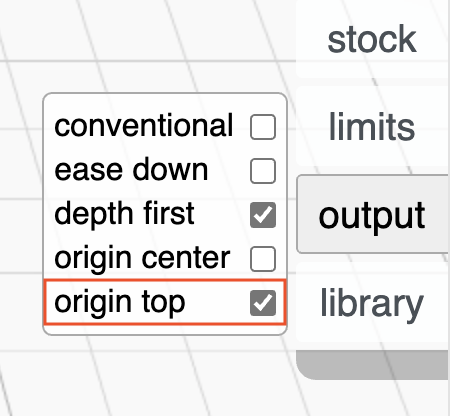 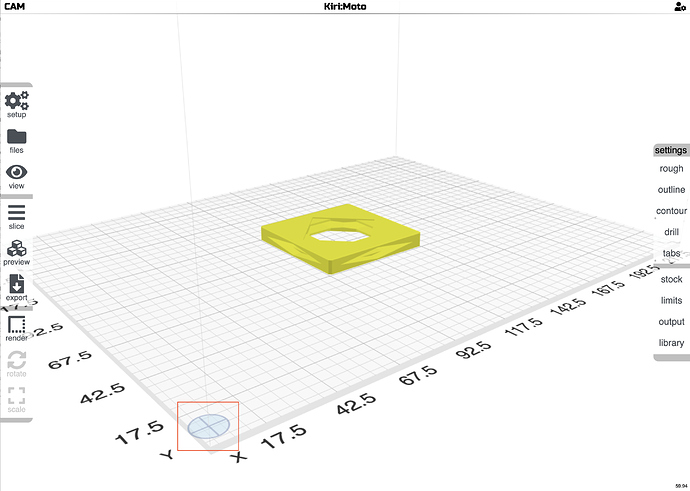 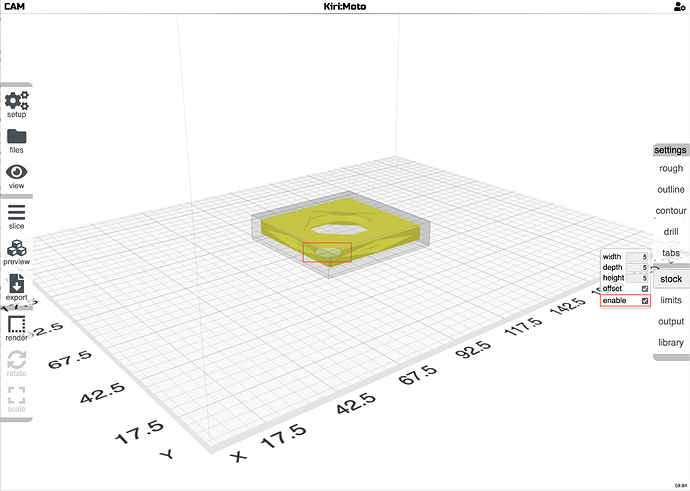