The 3.0 release contains a number of significant internal refactors:

And countless bug fixes and other improvements. These changes and the internal refactoring work open the door to new features that would be difficult otherwise.

Can you please elaborate on these two improvements:

80% reduction does this mean it can be five times as fast with the same memory or it doesn’t work that way?

What to expect from the performance?

Thanks for the great work!

Since I helped the memory improvements with some torture models exhibiting a lot of RAM usage, I can answer the question: Some models that were taking a long time and/or were impossible to slice before due to how memory was allocated, now work. RAM usage is down, but since memory management also takes time, processing time is also down. On my potato laptop, some models that took 45min to slice and failed with just the right (i.e. memory intensive) settings, sliced within 8 minutes afterwards. That was before the threading and wasm improvements which brought processing time to “competitive with S3D and KISS Slicer processing times”, i.e. highly optimized, natively running C++ code.

In my tests, Kiri:moto was consistently faster than PrusaSlicer2.3 and Cura 4.8/4.9 (up to a factor of 5, depending on model and settings, YMMV). I’ve not done comparisons with newer versions of each mostly because kiri:moto is now fast enough that I don’t bother (-:

What is “belt flatten”?

The majority of memory and processing improvements accrue to FDM mode by way of threading and WASM co-routines. But CAM also benefits from about 50% of the memory improvements and some of the WASM work. This will help with ultra-detailed contour milling. The 3.x development roadmap will see threading come to CAM, too.

Regarding belt flatten, I posted a video about this a couple of months ago. The mesh healing video went up around the same time.

It takes quite a bit of time to script, assemble, and edit videos like the 2.5 guide. It’s becoming a bit dated, so I need to carve out time to make an update.

Oh, for the belt printers. That makes sense now.

@hwa thanks for your help with torture testing. it was instrumental in finding numerous bugs and areas for improvement.

Loving most to the new updates. However, I am having an issue when I slice in the Laser area. Regardless of what I do, the slicer automatically adds multiple instances of my object.
For example, I uploaded one part that was rather small. In the “Arrange” tab it showed only one instance. After slicing and going to “Preview” tab, it had grown to six instances. The export function then generates g-code for these multiple instances.
Hopefully I am just doing something incorrect and am the only one having this issue.

Thank you for any help that anyone can offer. Great software, please keep it coming.

Hi @MOUT911 and welcome. What are the settings under your Layers menu? Is height set to 0? Is Single checked? If not, you should see multiple slices in slice view. 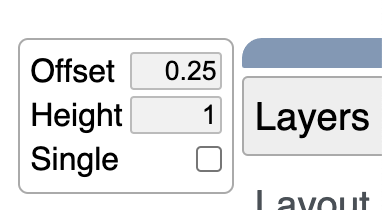 And the verdict is in, you are a genius. Thank you so very much. Didn’t even notice the “single option”.
FYI, using the laser function to run a CNC plasma. Works fantastically, just had to change the start and end g-code.

that’s great to hear. plasma cutting was one of the intended use cases.