How do I eliminate extraneous moves?

I’m in the process of fiddling with kiri:moto as an FDM slicer and I’m overall pleased with it so far. But I sent an stl of an excruciatingly simple ring to slice and it generated goofy, extraneous jumps around the ring rather than continuing in its arc. When I inspected the gcode, it appears as if a toolpath is generated which travels a certain distance around the arc, internally moves to the opposite side of the ring, prints a very small arc sector, then moves back across the internal space of the ring to the point it was when it was “interrupted.” Printing picks back up on its original path until it is interrupted again and repeats a similar, yet not identical, pattern.

How do I instruct kiri:moto not to do this? 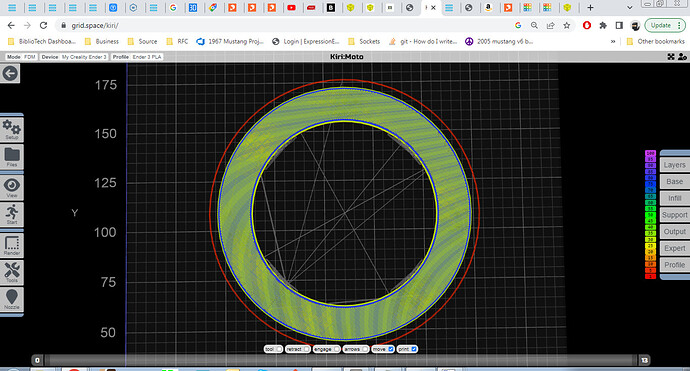 (I’m only allowed to embed one image per post, so I’ll split this into a reply)

There don’t appear to be any noticeable irregularities in the tesselation that would explain the jumps. I see the ends change direction (front left outer) and I can see some Xing across the ends (back right inner) but that doesn’t seem like that should be giving the slicer this much grief 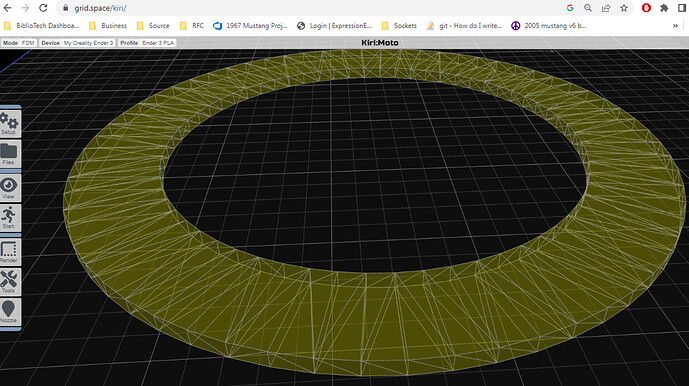 Do you have avoid gaps enabled under output? And is this happening during solid layers or sparse filled layers or both? 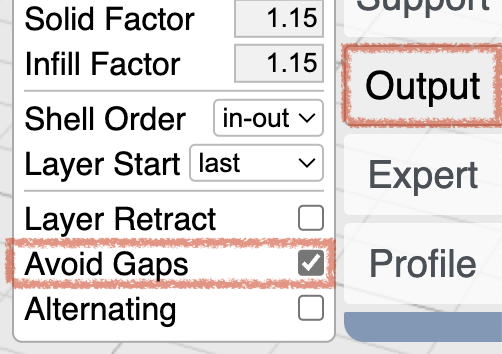 Avoid Gaps was checked for my slice that I captured in the screenshot. I performed that slice with a 15% infill.

Here it is resliced with 100% infill to remove that variable for the time being(All layers rendered):
I can’t understand what steps I need to take to eliminate those jumps. They’re seriously screwing with my print times and I think they’re the culprit behind a quality issue that I’m seeing in the exact areas of the jumps. 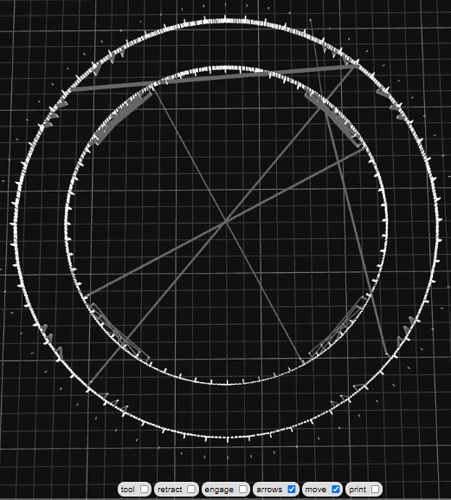 I know it’s a simple model, but if you can DM or email your workspace to me (right click export), I can repro exactly what you’re seeing and try to remedy.

Sure thing. How do I DM you the file?
I can’t find an option to send something to you directly

As you said, it’s a very simple model. It’s just a ring to adapt an item of one diameter into a mounting position of a larger diameter. I’d be fine to upload the file here except that I’m being informed by the forum software that I can’t upload because I’m “too new” of a user

You should be able to now. Or email to [ sa at grid dot space ]. Thanks. It’s always possible some setting like backlash compensation is interfering.

Thanks. I’ve replicated it here and will dig into the cause.

I appreciate it. If you think that it would also be helpful to have the stl, I can send it over to you as well. I don’t want to steal too much of your time; I’m just somewhat lost on what is causing that and what I can do to correct it.

It’s included in the workspace

Oh. I didn’t realize that the workspace included the stl itself. I thought they only captured the slice (and parameters)

As I kind of suspected, it’s the confluence of a couple of parameters. First, disabling z-hop causes it to route around the openings. The assumption in the code was that when z-hip is enabled, it’s preferred to do the retraction and hop long distances directly. Second, you had layer-start set to center which caused the start point to move around between layers. Setting it to “last” eliminated the rest of the forced hops. 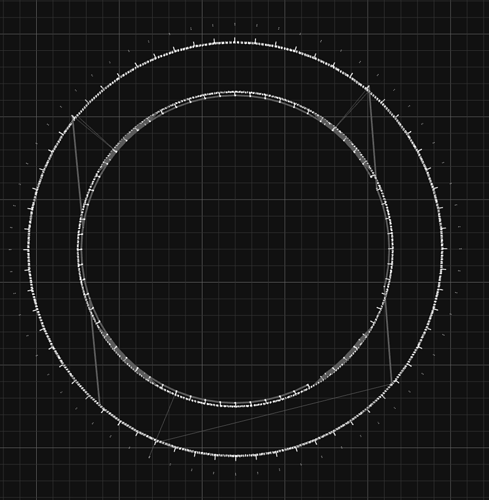 Ah! Thank you very much for the insight. I’ll keep this in mind as I move forward with other designs.