Yesterday while watching a long animation I wanted to know how long the actual carving was going to take, so without stopping the animation, I brought up the export dialog, and then dismissed it. When you do this, the animation loses track of its X/Y positioning, and continues carving, usually somewhere off the stock. It looks just like my mill does sometimes, when an axis gets jammed.

And speaking of animation: when it’s finished, it’s nice to be able to take a close look at surfaces, corners, etc, to see how well the milling worked. A button to hide all of the stock surface that the cutting head never touched would make it a lot easier to get a good view, since the surface is kind of in the way, from many viewing angles.

on the second part, there’s this. try “hide”

Thanks – “hide” helps, even though what it’s hiding isn’t what I thought I wanted hidden!

Another animation wish – a “skip-to-end” button.

Sometimes I just want to see the final shape, to inspect for oddities, or to see the overall surface effect of different carving parameters. A “skip to end” button would be analogous to the existing “skip to beginning” button. (I suppose someday there might be a slider, as in the other views. But in the meantime, this would be handy, since the alternative is waiting for the animation to complete, while my laptop’s fan roars as it roasts my leg.

skipping to the end means doing all the calculations the animation does. hard to short cut that. and the reason there is no rewind: it would require a massive undo memory stack. analogous to unscrambling an egg. it’s not simply reversible.

Okay. I didn’t think you’d be able to shortcut the calculations – but I thought that not having to display the results would save considerable time. I may well not appreciate how little of the time is the display.

Me too for skip-to-end – assuming that the calcs would go faster without rendering.

Something like 0-9 in layer view to skip to fractions “would be nice”. (understood that selecting an earlier fraction triggers restarting calcs.)

ok. i’ll look into it

Now that I’m in the phase where I’m interested in carving more than one of my parts, another use for seeing the results of the animation has cropped up: Being able to check whether my part (plus outlines cuts, plus clamps) will fit on a given leftover piece of stock material. And related: how closely together I can fit two or more copies of the same part, when trying to carve them at the same time. (Great feature, BTW!).
Of course, neither of these requires full animation. All I need is a visualization of the outer edge of the outermost cuts. So maybe that’s a subset of animation?
And while I’m at it.

An on-screen measurement tool would be really handy at this point, as well. “Do I really have room for a clamp there?”

All great ideas. The auto layout feature is supposed to account for the largest endmill used and space parts so that there is no collision. Maybe I broke this? And for cutout animation, if you enable only outline outside-only, that should reveal what you’re looking for. A bit clunky, but a workaround.

On my todo list is looking into accelerated animations that skips steps to speed it up. Not sure if that’ll work, but I know I can make some improvements.

Also on the list is adding clamp visualization and collision detection.

Hmm… I was just referring to being able to 'd’uplicate a part, and have them both carved at the same time. Where’s “auto layout”? Oh: 2.5?

when enabled, the a key performs a layout or a layout occurs when a new part is added.

Tried it – it’s close, but not quite, for my part(s). Also, it doesn’t pay much (if any) attention to the stock boundaries. 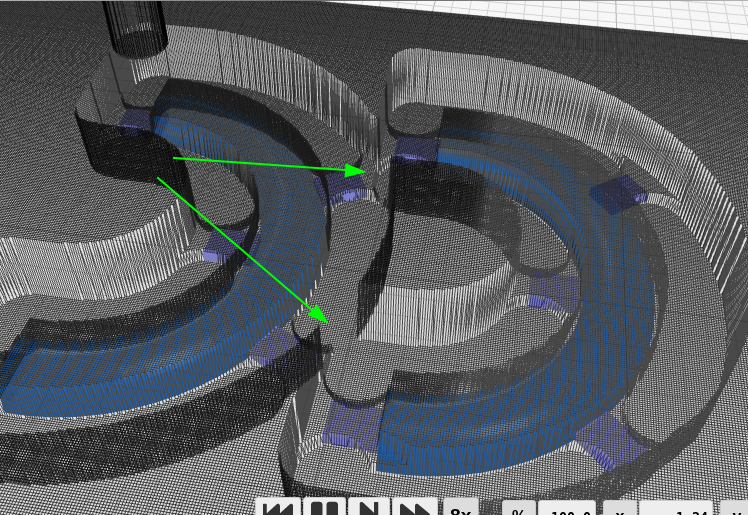 that looks like a failure to go up between parts? new routing code will fix that.

and, yes, at the moment stock boundaries are ignored. that will change.

No, it was simply a case of the parts being placed too close, and their respective roughing/outlining operations overlapped. Here’s a view from the top.
(As an aside: I was confused when looking at this image because the tabs are in different places, until I remembered that I had to re-tab the duplicated part, since it arrived without them. I understand that tabs aren’t “part” of a part, but it would be really nice not to have to reapply them every time you re-import, or duplicate, the same part. I’m sure you already know this.) 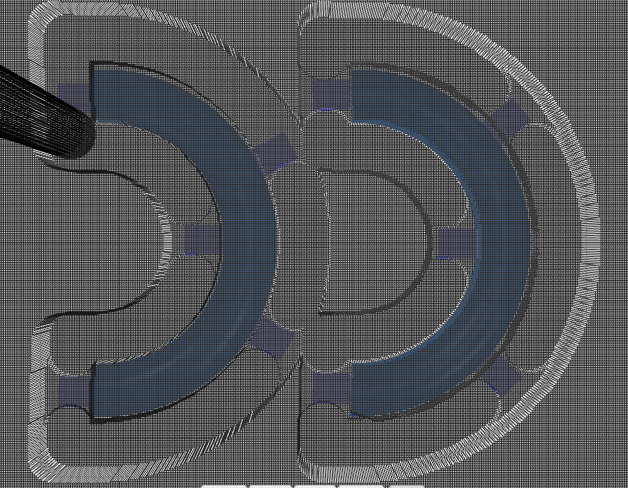 I’ll add a “me too” for the skip to end capability. I have some parts that could take hours to cut, and even at 8x that is going to take a long time.

Also, on my system, with an old graphics card, rendering seems to take far longer than calculating. If I put the KM browser tab in the background progress is much faster.

If I had a preference I would vote for a separate “skip to end” button where no rendering is done on screen, just the calcs are done, then everything is displayed at the end. Maybe a progress bar would be necessary so it is clear that something is happening.

If it is not possible/easy to skip the rendering along the way then a “max” speed option would be next best (ex: cycle through 1x, 2x, 4x, 8x, Max. when clicking the speedup button)